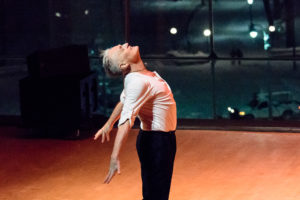 As an artist and scholar, my work investigates embodied imagination, improvisational composition, and nonverbal/non-discursive ways of knowing. My transcultural transdisciplinary work examines the body as a medium to communicate. 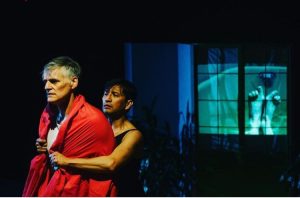 The themes of my choreographic work are varied. In 2022, I am exploring dance video. Since January 2019, I have performed monthly improvisations broadcast in my “Moveable Moments” series. These 30-second improvisational compositions explore urban and rural interior and exterior spaces, body parts, and light and darkness. These works are informed by the times, places, and forces impacting my lived life.

My Mexican family, friends and colleagues inspired me to investigate Mexican culture and Frida Kahlo for over 30 years. The result was a six-year creative process with a female-female cast in “Las Fridas.”

Due to the sudden illness of one performer, I assumed the 60-minute 16-section Light Frida role in one week for our December 2015 New York studio previews. I continued this impromptu investigation into the implications of fluid casting. We completed our April 2016 NYC theater previews of the 60-minute “Las Fridas: A Movement Installation and Offering” to critical acclaim with alternating female-male and male-male casts, sound and lighting design.

Our November 2019 and January 2020 world and New York premieres at MDD Studio Theater 310 at New York’s Clemente Center confirmed the work’s originality and impact with audiences and critics.

Next steps include performing at 4 Mexican dance festivals that invited us to perform “Las Fridas.” Stay tuned.

My artistic journey included my burning desire to re-enter the solo performance arena in May 2015. Over the next year, I presented a 60-minute improvised solo program including movement and text, abstract and literal action, drama and comedy. 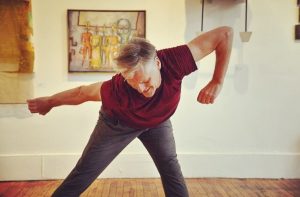 In an earlier phase of my choreographic development, I was fascinated with creating forms with exacting polyrhythmic athleticism and technical virtuosity to reveal larger themes, including transcultural social issues. I explored an encyclopedic range of topics, such as those that follow. 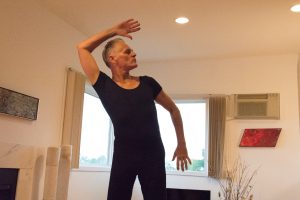 One work, inspired by a Paul Klee painting and accompanied by Poulenc’s Organ Concerto, explored children’s games, the secrets they contain and what it means to be invisible.

Another related Mexico’s Day of the Dead to the AIDS crisis.

I also “updated” the concepts of the Bauhaus through an homage to one of the original members of the Bauhaus I knew, Andor Weininger, explored the figure 8 in spatial, corporal, and rhythmic patterning juxtaposed with clown elements, and investigated relationships with family, ancestors, and the Earth.

I explored the roles of dance and the dancer in different cultures and traveled and interacted with people from all over the world. 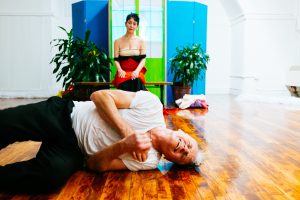 My work enabled me to dance and teach in a variety of cultural settings, including:

El Salvador during the last year of the war and in New York creating a work with a Salvadoran dancer about women in El Salvador,

Northampton, England, where we brought a dynamic new form of arts education to the country, particularly to developmentally disabled students,

rural Cambridge, New York, where we brought teenagers and senior citizens together for a project combining oral history and dance,

Ljubljana, Slovenia, shortly after that country’s return to the Western bloc,

Puebla, Toluca, Mexico City, and seven small towns and country fairs throughout the State of Mexico,

and the Peruvian and Ecuadorian Andes. I developed a Peruvian-U.S. company of 19 dancers and musicians and created a commissioned dance-theater work for the National Dance Company of Ecuador based on current events and social themes of those countries. 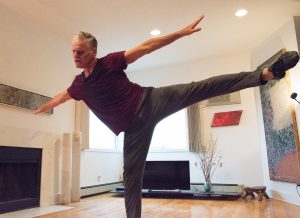 Other transformative experiences included working over 25 years with a traditional Quiché Mayan dance and music community in Chichicastenango, Guatemala and seven schools in New York City and State,

and lecturing about developing a dance company to artists and managers from Eastern Europe, the newly independent states and Russia in Volgograd.

2012 and 2015 Russian photographic exhibitions at Moscow’s A.A. Bakhrushin State Central Theater Museum celebrated my work in the context of Russian ballet dancers in the West. 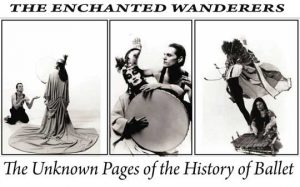 These journeys fill me up with images, experiences, sounds and motion, and inspire me with new dreams for new ways to move, create and speak through the living, breathing, feeling body. I come home filled with new perspectives on what it is to be alive and full of dreams about the future. I return feeling connected with a transcultural and transdisciplinary community of artists.

Whether I am speaking with a classical Chinese dancer from Beijing in Queens or with a modern dancer living in Scotland who hails from Ghana or with an experimental choreographer in El Salvador or with a 5-year old child in Arequipa, Peru who spontaneously shares a joyous ancient folk dance with me at the moment of our meeting, I am exploring what the creative process means to me and to fellow human beings. 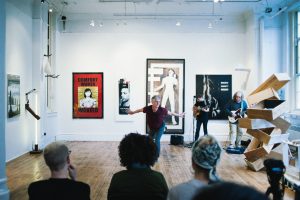 NYC press and audiences referred to DeGarmo’s performance range as “encyclopedic,” his performances as “frightening… the way great art always should be,” and DeGarmo as “a gladiator in various arenas.”

Thus far in his professional choreographic career, DeGarmo has created over 100 dance and performance works and directed multiple tours in 13 countries.

Stay Up to Date

“Rather than slowing down as his career matures, [DeGarmo] is coming back to his roots in choreography and performance, creating a culture all his own of what is accepted.”